Yesterday I finished off my prototype. I was really surprised and happy that installing it onto my phone was a quick and easy task. The Unity Android setup contained everything that I needed to get my app running.

Of course the day did not go by without any problems.

So I started the game up for the first time. And the level did not load. Admittedly I almost expected this, since the levels and localization are stored in json and text files, and accessing them on a different OS would surely be needed some extra care.

After that I could finally show it to random people such as my sister and brother.

And it was quite interesting. The way they played the game was different from what I expected. I saw them provoking a lot more errors in the UI, that I did: The game laid different tracks then the players intended, because they swiped to fast over the grid. I was relying on the update routine to update the tile before the user goes over to the neighbouring tile. This is not sufficient for a quick swipe, leading to placed curve tiles or no tiles instead of straights. Thats a fine learning. As a dev, you tend to get blind to the shortcomings of the UI, and ignore them, because you need to do something else first. And then you dont realized them anymore at all… so thats something I learned. 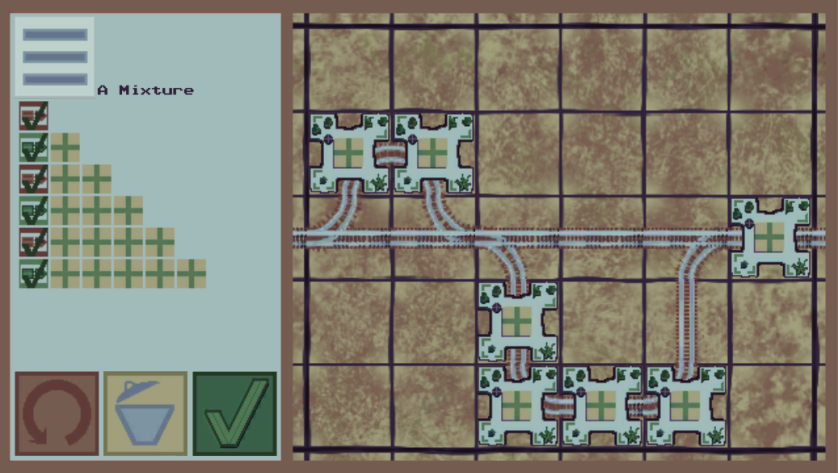 Of course they found bugs as well. Here is a level and a solution that should have worked. But it didn’t.. sad story. The problem here was, that the right tile acted as a small loop, letting the trains reach the station again and again. Loops are in general allowed, and even encouraged, but they should exist as real rail loops, and not as a glitch in the Matrix.

Well the evening got closer, and I wanted to replace some of the grafics (the rails) with newer versions. I saw the game has a wooping 45 MB size already, and most of my sprites till then were single files. With the intent to reduce space requirements and increase asset maintainability, I wanted to move them into a single file. Not a good idea on a Friday evening. Something broke somewhere, after I deleted the old files and I could not place tiles anymore on the grid. At least they were not visible. But it was not that the sprites were missing. Upon inspection, everything seemed to be fine. Everything except for the Tile matrix, that was now never initialized correctly. Dont ask me why it worked before. So I rewrote part of my code and imported the assets again in the morning, and now it works again. It just took my Saturday morning. But thats ok I guess…

This is TheNerd Automaton. And here I show off, what I am doing on a daily basis. If you like to follow my progress be sure to leave a comment :)